The Poodles intelligence and adaptability have made it a universal favourite. A wise intellect is apparent in eyes coloured from dark brown to a golden hazel. The Poodle was originally a gun dog noted for its ability in the water and bird hunting skills. Life expectancy is 15 years.

There are 3 sizes of Poodle.

Colours vary from chalk, cream, apricot, red, chocolate, black and blue (silver/grey).
Parti Poodles have patches of more than one colour and the skin below is the same colour as the hair.
Phantom Poodles have different colours in their coat that do not match the skin below.

Poodles are intelligent, alert, and active. Their intelligence and athletic build has made them popular as trick dogs or circus performers for centuries. Poodles are extremely people oriented and are eager to please. Poodles are very good with children and are adaptable and easy to train. They don't require as much exercise as other hunting or working breeds, but do appreciate it.
Poodles were originally used for hunting dogs but are now used in a variety of jobs like guide dogs, truffle sniffing dogs, and therapy dogs.

The Poodle originated in Germany at the beginning of the 14th century.
The name Poodle probably comes from the German word 'pudel', which means to splash in the water.
The Poodle has been depicted in paintings and drawings from at least the 16th century. The Poodle has been popular for many years in France, performing in circuses and as a duck retriever. The Poodle is still known as the national dog in France and is sometimes called the French Poodle.
There are many hair cuts used on Poodles, the traditional show cut with long fur covering the dog's leg joints date back to winter hunting. Most of the fur was clipped short for easier swimming but the joints, lungs, heart, and kidneys all needed protection from the cold.
Some of the many things Poodles have been used for over the years include 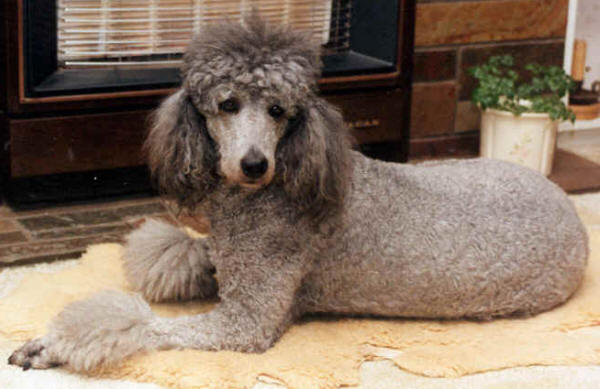